Al Beadle was born in St. Paul Minnesota in 1927 and lived in Minnesota throughout his childhood. Although he never graduated from high school and was not yet of age to join the military, Beadle snookered the Navy into allowing him to join prematurely, where he became a member of the Seabees; the Navy Construction Battalion. After his stint in the Navy, Beadle returned to Minnesota where he utilized his Seabee skills to join his father’s commercial kitchen design company working on kitchen layouts and construction. He married in 1948 and, in the following years, designed two homes for himself and his family in the Minneapolis area.

In 1951 his father moved his commercial kitchen design business to Phoenix, Arizona, and Beadle and his family followed suit. While he started in Arizona by working with his father, the design bug got the better of Beadle, and he was soon ensconced in the architectural community that was developing the greater Phoenix area with breakneck speed. Beadle continued along as an accidental architect (meaning he had no former training or architectural license) and established his own firm in the Phoenix area.

One of Beadle’s earliest works (that wasn’t for himself) was for the Fingado family. The Fingados had recently relocated from Texas to Phoenix and were looking for a home to call their own to no avail. Happening upon a modern home that they loved (but was already sold), their Realtor turned them on to Al Beadle and his fledgling architectural practice. The Fingados purchased a piece of land, contracted with Beadle, and away they went. 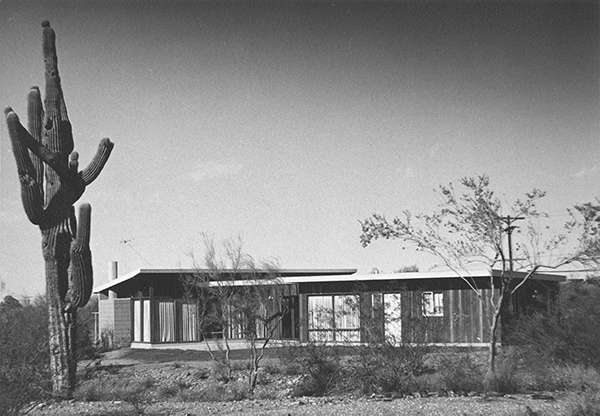 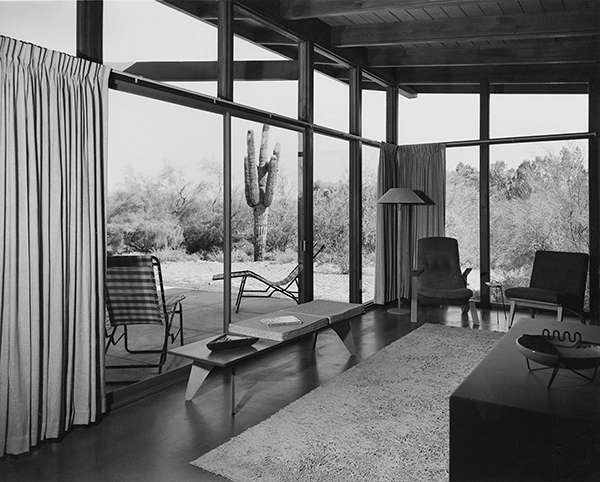 The first Fingado house bedroom looking out onto the porch and the landscape beyond. (2)

Beadle’s design leans very much into the International Style, and his design is often compared to that of Mies van der Rohe and his box-like International Style work such as the Barcelona Pavilion. Because of this stark, rectilinear style, Beadle’s home designs became known colloquially around Phoenix as “Beadle Boxes.” The Fingados wanted their own Beadle box overlooking the mountains of Camelback and Praying Monk. Beadle’s design for this home had floor-to-ceiling windows to take in the views and to develop a relationship with the landscape. Beadle was also not afraid of color. Where other homes springing up in the Phoenix boom were all painted some shade of beige (sound familiar?) the Fingado home was Palo Verde Green with yellow doors, and he even painted the exposed ductwork in the dining room an Ocotillo Red. Bold color choice!

The Fingados would have remained in that house as long as they were able, had it not been for that amazing, Beadle design. As it turns out, they were only in the home for four years when they were approached by another family moving to Arizona who just HAD to have their house, so the Fingados sold it to the couple and had Beadle design them yet another home. It was similar to their first Beadle creation in that is was a Beadle box with bold coloring, painted mauve with washed redwood accents. The purple continued to the inside of the house where Beadle also had a hand in several designs of interior pieces – from a two-sided bathroom vanity to a floating media center in the living room to the conical fireplace in the living room. 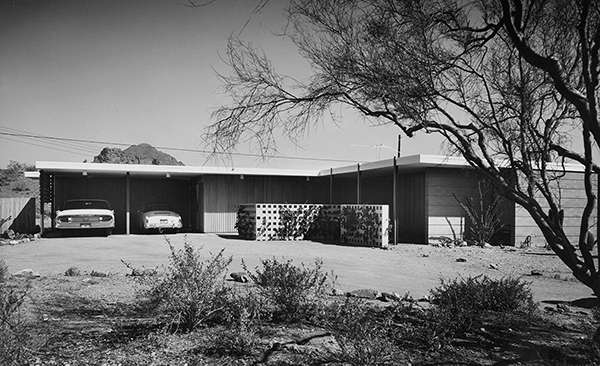 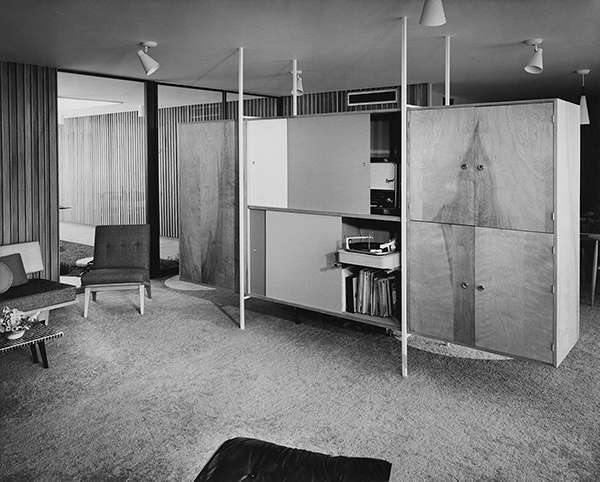 Built in sound system in the Beadle-designed divider unit in the second Fingado house. (4) 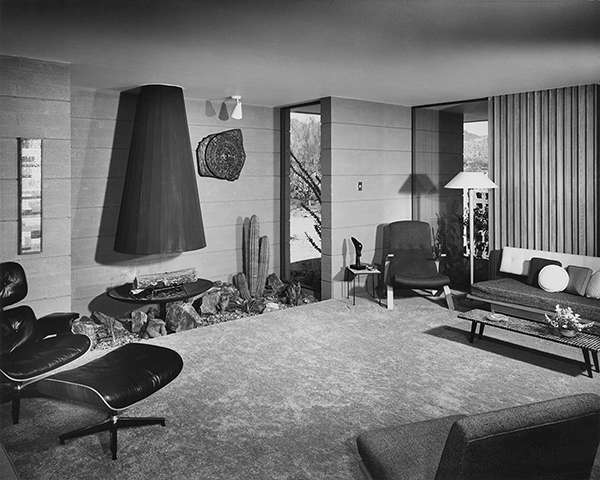 The living room in the second Fingado house showing the semi-conical fireplace. (5)

During this time working with the Fingados and others, the jig was up for Beadle’s accidental architectural practice when the licensing board of the State of Arizona cracked down on Beadle practicing architecture without a license. Fate stepped in by way of Alan Dailey, an architect who had retired to Phoenix and allowed Beadle to continue to practice under Dailey’s name and license to earn his apprentice hours until Beadle himself was able to take (and pass on the first try) his licensing exam. Potential crisis averted.

Besides houses, Beadle also worked throughout the 1950s into the early 1960s on several different types of commercial projects. His first of these commercial projects was the Safari Resort in Scottsdale. At the time of construction in 1956, the area chosen for the Safari Resort was a deserted, rural area which was even more desolate in the summer months because of the oppressive desert heat. The Safari Resort aimed to change that with air conditioning in every room and a large, figure-eight pool nestled into a lush, six-acre complex that also included 108 rooms, shopping, high-end dining, a cocktail lounge (of course!) and the area’s first 24-hour coffee shop, to be open year-round. Al Beadle designed the buildings in an African style with a modernist’s twist – the Phoenix New Times described it as, “…a collaboration between Frank Lloyd Wright and Tarzan.” While still considered a “motel” because of the drive-up rooms, the owners used the name “resort” to escalate the Safari into a world of its own. 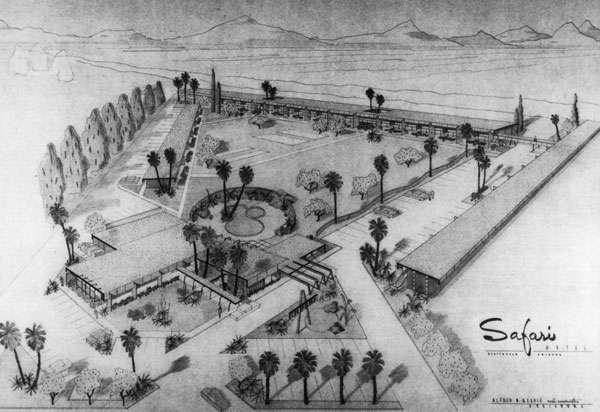 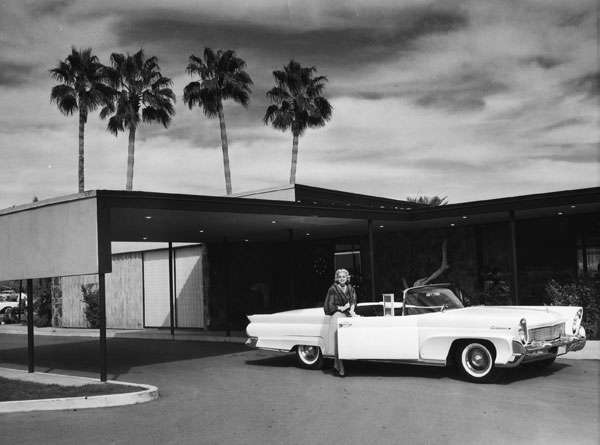 The entry canopy to the Safari Resort. (7) 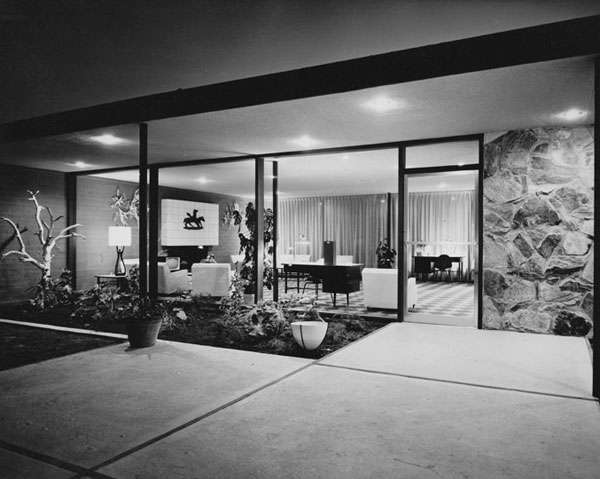 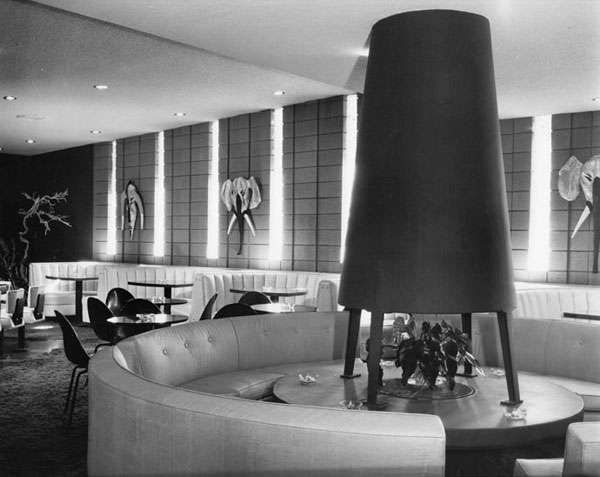 Brazier in the Congo Room at the Safari Resort. (9)

The original Beadle creation was a low-slung, horizontal building with posts holding up the arrival canopy. The posts were intentionally small in diameter so as not to detract from the horizontal styling of the building. Sections of rough-hewn rock for that safari feel were broken up by Beadle’s trademark floor to ceiling windows. It is unclear whether Beadle also had a hand at the designs for the interior, but the chimney over the charcoal brazier in the Congo Room looks strikingly like the fireplace designed for the Fingado family’s second home. So popular was the resort, that in only three years, they underwent a $3 million, five-acre expansion.

Throughout the 1950s and 1960s, this was the place to see and be seen in the Phoenix area. Frank Sinatra, Jr., Sonny and Cher, Burt Reynolds and even Bing Crosby were guests at the resort. The resort continued to flourish and grow, and eventually was no longer the Beadle design of light and airy “Beadle Box” international style architecture. Art Beadle in a 1997 Phoenix New Times article said, “The whole place has been remodeled to be mediocre and nonvisible. [The current owners] are doing an excellent job of [making people] not notice it. Those buildings aren't rebuildable; it's a mess. Get rid of that shit. It doesn't bother me at all.” And get rid of it they did – the resort was bulldozed in 1998. 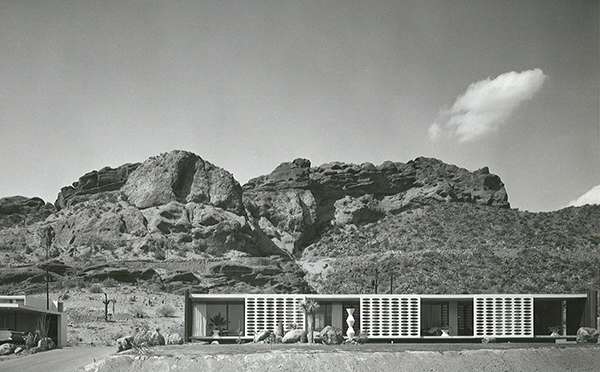 Throughout the years, Beadle continued to build his residential “Beadle Boxes” throughout the greater Phoenix area. One of his earlier works remains one of his most photographed and beloved. Built in 1954, White Gates (as the home came to be known) is still a beloved pilgrimage for Beadle-loving architects and preservationists. The home was highlighted by an article entitled, “A House That Calls it’s Family to Order” in the 1961 issue of Living for Young Homemakers magazine. It was one of Beadle's own residences for him and his family and is, at its heart, a Beadle Box which floats above the desert floor on its foundation. The highlight of the front face of the house is a white screen wall made of a grid of ellipses, built by hand by plastering over a 2x4 grid with an oval of sheet metal stuck in each void. (Ingenious, really). The rear of the house has another beautifully executed sunshade device of three barrel vault mesh units used together as a canopy. The home sits on the southern side of Camelback Mountain in Scottsdale. 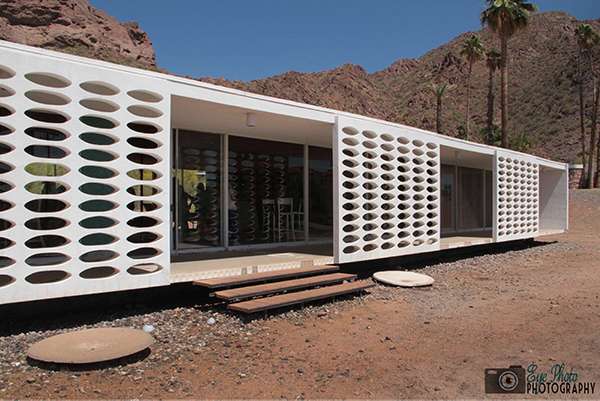 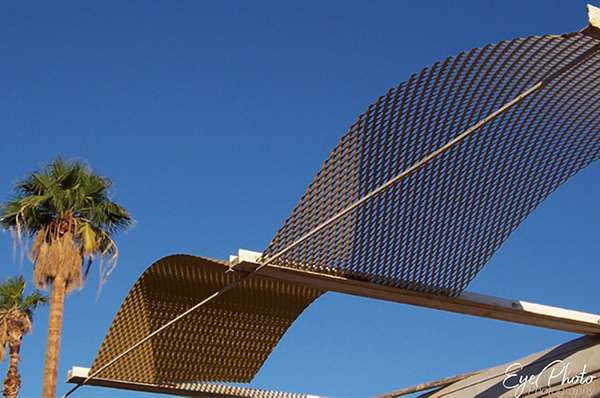 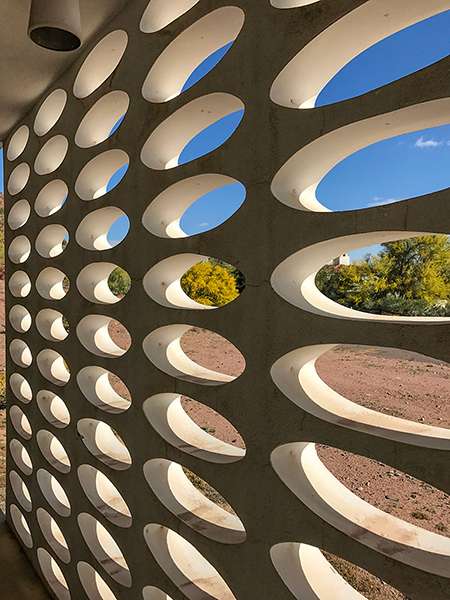 Close-up of the White Gates perforated walls. These are not concrete blocks, but plaster over a wood and metal skeleton. (13) 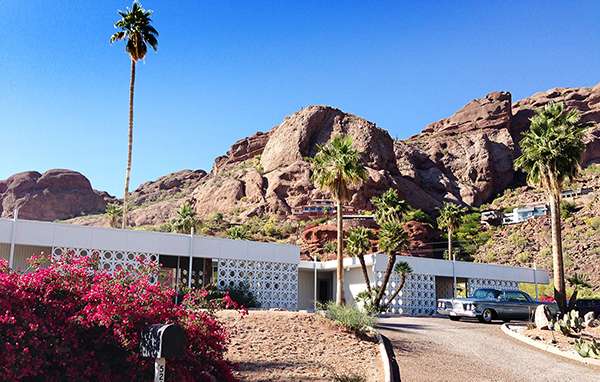 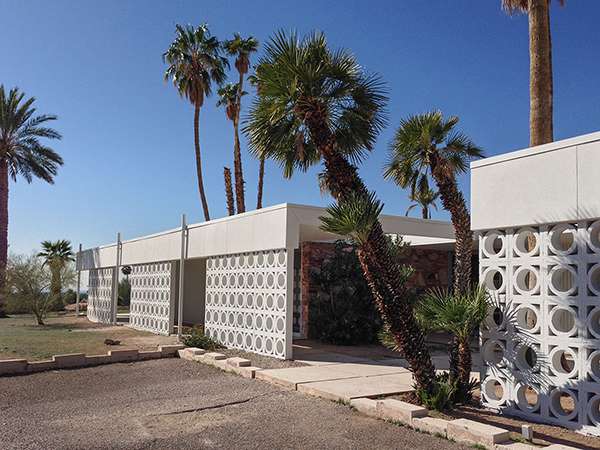 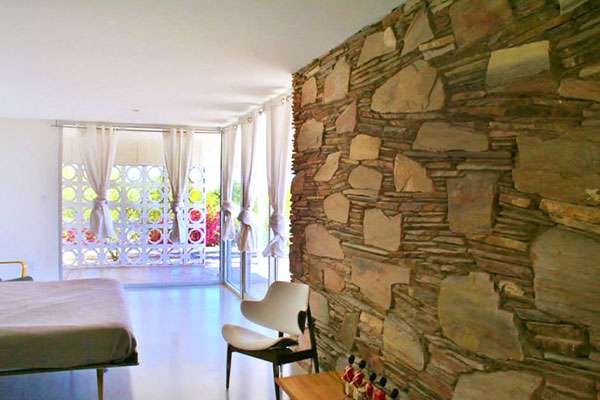 The neighbor to Beadle’s White Gates is the Uhlmann House, another well-known Beadle design, designed for the owner of the Safari Resort. Here Beadle has executed a similar, white screen wall on the front, but was able to use pre-manufactured concrete breeze blocks which were more prevalent at the time of the Uhlmann house construction. Behind the screen, block walls are constructed of native stonework, similar to that used on the Safari Resort design. Beadle was still not shy in his use of color – on both the Uhlmann house and the Safari Resort, Beadle used soothing tones of pink and purple to highlight his work.

While the Uhlmann home has been lovingly restored, as of the most recent update I can find, White Gates is just a shell of a building, holding on by a thread for someone to lovingly restore it. I use the term “restore” and not “preserve” as the entire interior of the home has been removed, and it is just a shell. Many people have tried to purchase the building a save it, but none have succeeded. It is still in threatened for tear-down and (beige) McMansion status.

Beadle continued to practice throughout the 70s, 80s, and 90s and continued to move and build new homes for himself and his wife Nancy up until his death in 1998. Beadle continues to be a beloved name in the Phoenix area, and those living in Beadle houses have started a registry to list these historic homes.  During his lifetime, Beadle was prolifically responsible for over 100 residential and 100 commercial properties. 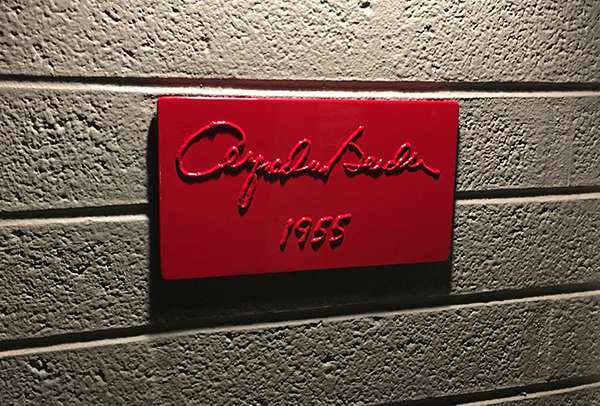 This article only scratches the surface of Beadle and his buildings. There is so much more to learn about Beadle and his legacy. We suggest the following articles from the FABULOUS Modern Phoenix website:

The granddaddy of everything Al Beadle can be found on the Beadle Archive on Modern Phoenix:
http://www.modernphoenix.net/beadlearchive/index.htm

From the Phoenix New Times newspaper, an article about the Safari Motel: https://www.phoenixnewtimes.com/news/safari-tales-6423043

A huge THANK YOU goes out to the following people who helped enormously in the source of information and photos for this article:

Alison King of Modern Phoenix. She's one enormously busy lady, but she took time out of her schedule to help me source the credits for the photos in this article along with being one of the main brains behind the Modern Phoenix Website.

Jennifer Gunther, another contributor to the Modern Phoenix website.

Gerri Beadle-Murray, daughter of the man of the hour, Al Beadle, for her permission in using photos for this story.

Joshua Campen, photographer extraordinaire of Eye Photo Photography for allowing the use of some of his amazing images of White Gates.

Harold Housley and the staff at the ASU library for their help in sourcing the image rights to images from the Alfred Newman Beadle Collection.

Thank you for reading about the art and architecture of Arizona architect Al Beadle. Do you live in a Beadle Box? Have any personal stories about Al Beadle? Please let us know in the comments below - we always love to hear from you. 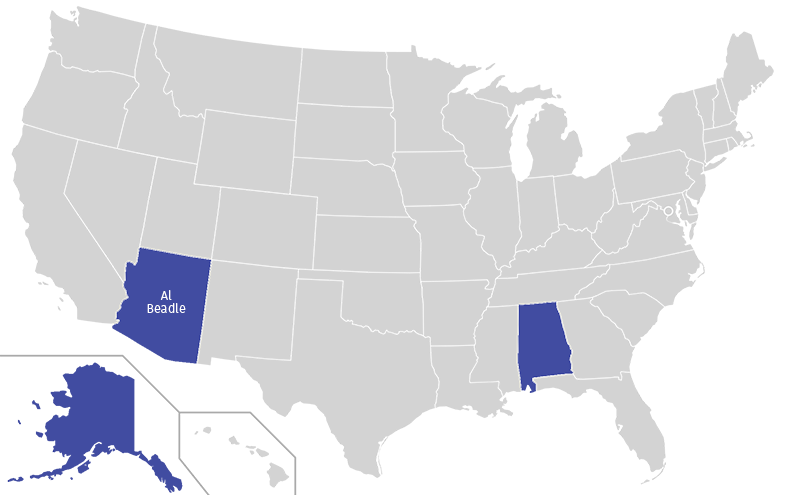 Photo of a young Al Beadle courtesy of the Beadle family. Used by permission.

Image courtesy of the Beadle family. Used by permission.