We're continuing our series, reaching out to Realtors who specialize in mid-century properties. We'll be asking questions of Realtors across the United States to see what's the same or different in various part of the country. Today we're in Dallas, Texas, with mid-century specialist Brandon Stewart of Mod 214.

Brandon Stewart with David Griffin & Company Realtors.  I've been a Realtor for about 8 1/2 years and am probably most known for my modern real estate website mod214.com and the mid-century modern newsletter I've sent out for the past several years. I'm also a licensed architect, though no longer actively practicing.   I love great architecture and well-designed properties - especially mid-century modern.

I have specialized in mid-century modern and contemporary properties since first getting into real estate in 2009.

My first listing was a Ju-Nel mid-century modern in East Dallas.

I bought a mid-century modern home myself in 2005 and didn't have a very good purchasing experience.  I felt misunderstood and made a mental note at that time that this segment of the market was under-served.

When I left the architecture profession in 2008, I decided to revisit real estate and the lack of expertise with regards to well-designed properties.

The majority of the homes I sell are modern, but real estate is a relationship business.  I have many clients with an appreciation for design that have chosen to purchase non-modern homes.  I don't discriminate.  I run an extremely customer service oriented business, and ultimately want my clients to be happy with their purchase - regardless of design style.

I mainly focus on residential real estate but have done a few commercial sales as well.

I typically consider 1950-1969 the range for a true mid-century modern.

The awesome stealth-like ones usually fall within this range.  There are certainly exceptions, but as we moved into the 70s, the roof pitch got much higher.  I find those popular too, but nothing beats the one-story low to the ground MCM with tons of glass.

Mid-century modern in Dallas is extremely popular like it is in most major cities.  Demand far outweighs supply, which often creates a feeding frenzy.

I certainly haven't seen it shrink yet, but I do always wonder if the popularity will fade at some point.

I think there will probably always be a core group of MCM enthusiasts who will never give up on the style.   That will include me of course.

Texas is hot, and some of the design details that are appropriate for the comfortable climate of southern California aren't as successful here.  Some of the more popular Texas architects have adapted MCM details to fit our climate.  Good architecture in Texas usually involves deep overhangs to provide shade and/or a solar orientation where large expanses of glass face the north.

Prices in the Dallas market have appreciated considerably in the last five years.  $300,000 used to get you a really nice MCM in Dallas, but not so much anymore.

$400,000 is pretty much entry-level at this point with prices going above $2 million for exceptional properties.

The majority of them are younger and often first time home buyers.  In general, I've found that MCM design is most appealing at a lower to mid-level home price point.  The MCM luxury market is very slim.

I generally see two types of clients interested in mid-century modern.  The first type is rarer, but they are the people interested in all original components and untouched in terms of updating.  The second type is more common and made up of the people who really are just after the modern clean-lined aesthetic.  Often times they can't afford new modern construction, and MCM checks off the boxes in terms of what they're looking for within their budget.

As of today, I still have a record for zero MCM tear downs sold... and I've certainly sold several that were right on the edge.  I hope to keep my record, as I don't relieve believe in erasing the past, especially if there is anything of architectural significance that can be saved.

Cry... No seriously, I, unfortunately, see it quite frequently.  I try to explain the situation, but I usually just have to walk away from those listings.  People who "remuddle" typically can't be reasoned with.

Oh, there's never a dull moment in real estate.  It's so personal that emotions frequently get out of hand.  I was once showing my own listing to an internet buyer that I had never met.  When several other buyers and agents entered the property, the buyer I was with got so angry at not being able to see the property in private that she confronted one of the other buyers and asked her to leave.  A physical fight broke out between the two and the police where called.  Ironically neither of them purchased the home. (Ed: This is the best story yet.)

For me, the relationship really does stem from my own search for a mid-century modern home.  I loved the style even before I knew what it was called .  Fortunately, I've turned that love into a business that lets me help others in their pursuit to purchase their very own mid-century modern home.  I find that very rewarding and am thankful to all the people who have let me help them along the way.

I do!  As I mentioned previously, I bought mine in 2005.  In 2013 I decided to take it down to the studs, move the kitchen from one side of the house to the other, and add on a larger master suite.  We love the result which blends the past with some of today's popular amenities.

Many thanks to Brandon Stewart with David Griffin & Company Realtors for willing to be interviewed.  Interested in working with Brandon?  You can find him on his amazing website, Mod214.com.  You can also find him on Facebook and Twitter! 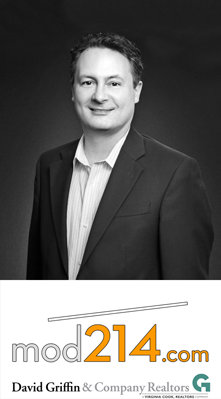