Thank you, Southwest Airlines, for cheap fares to the island! When Southwest announced a fare sale in the fall of 2019, my husband and I jumped on it, even though the vacation wasn't for months. February 2020, to be exact. This was my third trip to the islands; the first was a business trip (don't get too jealous - I spent the entire time indoors in a windowless conference room), the second time was my belated honeymoon with my husband, and this time we decided to recreate a bit of that honeymoon magic by staying at the same hotel we found for our honeymoon. (Note: I won't even mention what hotel that is - they've gone DOWNHILL, but that was the only bummer about this trip!)

Everywhere we go, we are always on the lookout for cool mid-century stuff. (Go figure). We love to wander and explore, and driving around in our convertible Beetle whom I lovingly named, "Bill", we found all sorts of amazing mid-century sights. Since Hawaii became a state in 1959, as you might imagine, many of the government buildings are all from that era. Case in point, the capitol. 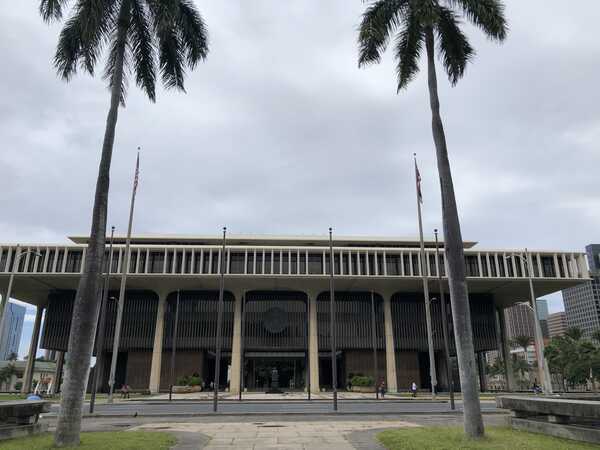 The building is constructed in what is now classified as Hawaii International Style. The building is an open-air structure around a courtyard open to the sky, with tall, thin columns supporting the fourth floor. There is much symbolism to the architecture. The columns invoke the feeling of palm trees. On either side of the courtyard, the two chambers of the House and Senate flare out in conical shapes on the sides of the building meant to be reminiscent of Hawaii's volcanos. The central open-air courtyard is in direct opposition to the traditional domed structure one sees in capitols - whereas the Hawaiian sky is the dome. 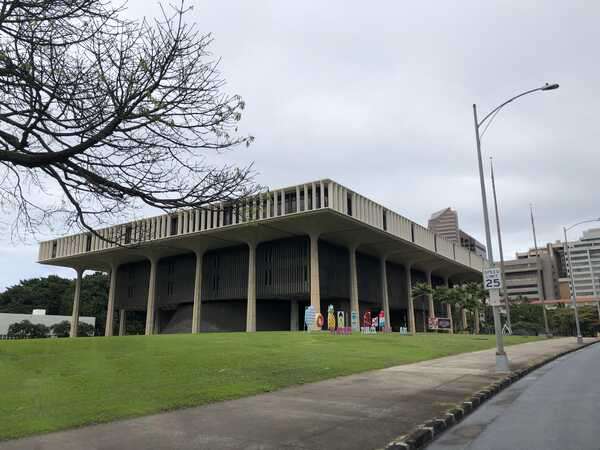 The capitol building showing the southeast side of the building which contains the Senate. 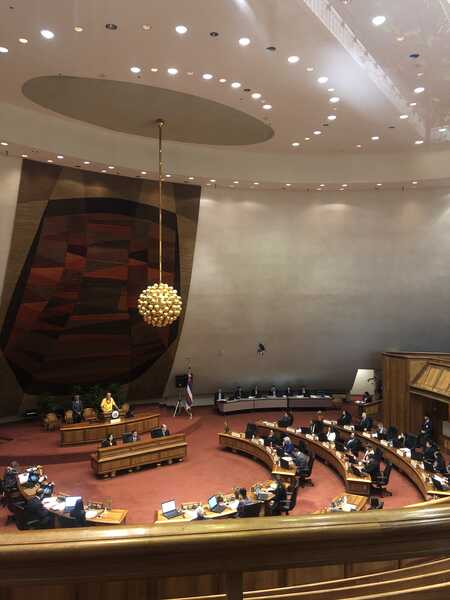 The Hawaii House of Representatives

The House was in session while we were there, allowing me to get this photograph of the inside of the chamber. The tapestry on the rear wall is by Ruthadell Anderson from Manoa. The tapestry on the House side is made with warm tones of reds, oranges, and browns, while a similar tapestry in the Senate is in tones of blues and grays.

You can see the wall on which the tapestry hangs - it is canted out in a conical shape. This is the inside of the volcano protuberance on either side of the capitol. 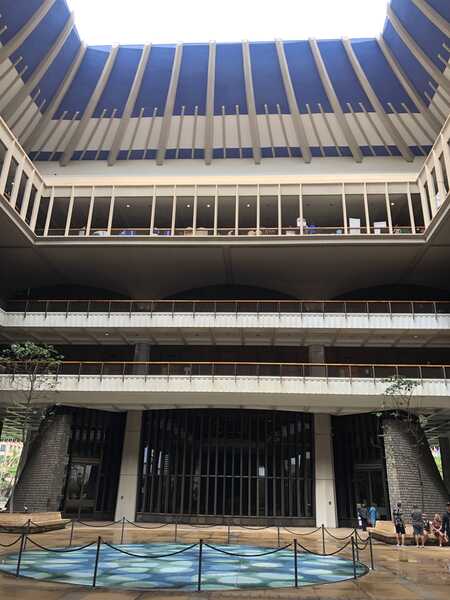 Courtyard of the Hawaii State Capitol 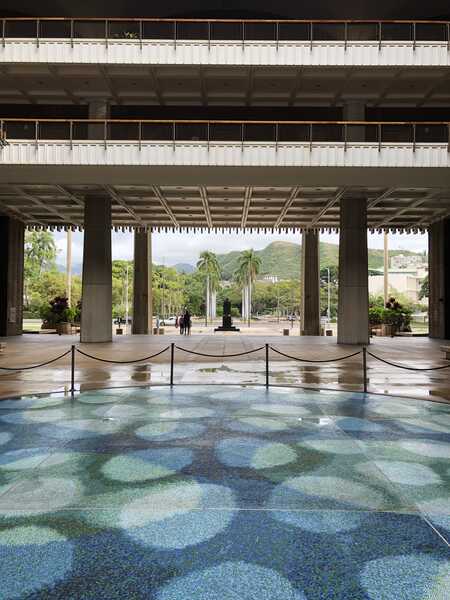 Courtyard of the capitol

The tile mosaic in the center of the courtyard is also symbolic of Hawaii similar to the architecture of the building. The mosaic mimics the colors and patterns of the dappled waters of the Pacific appearing to be stones rising above the water. Named "Aquarius", the mosaic is a replica of a painting by Maui-born artist Tadashi Sato. There are over 600,000 tiles in 500 different colors, each about a centimeter square.

The mosaic was restored in 2009. As a mark of the company performing the restoration, the mosaic contains one red tile in the sea of blues and greens. We did not find it! 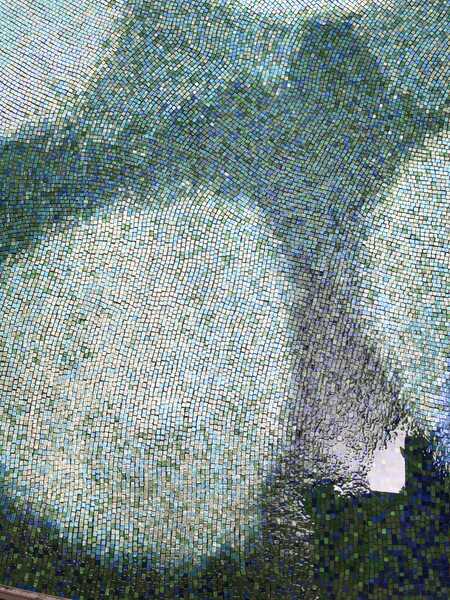 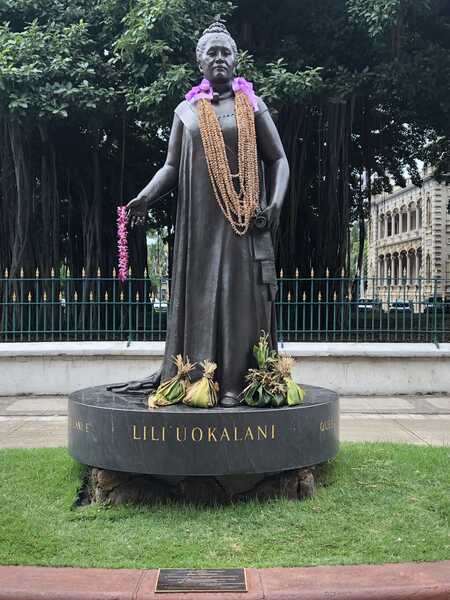 The statue of Queen Lili‘uokalani is between the Iolani Palace (the original territorial legislative home) and the state capitol.

The capitol building is adjacent to the Iolani Palace which was the original governmental building of Hawaii when it was a territory. This statue of Queen Lili‘uokalani is between the two buildings. Her outstretched hand is meant to indicate her peaceful surrender to the United States authority and to remind the people of the traditions and history of Hawaii and of its great culture. In her other hand she holds three things: the Hawaiian Constitution, the creation story of Hawaii called the Kumulipo, and one of Queen Lili‘uokalani's songs, "Aloha Oe". She was sculpted by artist Marianna Pineda.

She is often draped in gifts from the people of Hawaii, with leaf-wrapped ho'okupu at her feet.

On the opposite side of the capitol from the Queen Lili'uokalani statue is a statue of St. Damien by sculptor Marisol Escobar. Father Joseph Damien de Veuster was a Roman Catholic Priest from Belgium who ministered to those suffering from Hansen's Disease (leprosy) in the isolation settlement on the Hawaiian island of Moloka'i. Father Damien died of Hansen's disease at the age of 49. In 2009 Damien was canonized by Pope Benedict XVI.

There was actually a movie made in 1999 about Father Damien's life aptly entitled "Moloka'i". There is also a national park on Moloka'i at the Kalaupapa Leprosy Settlement. 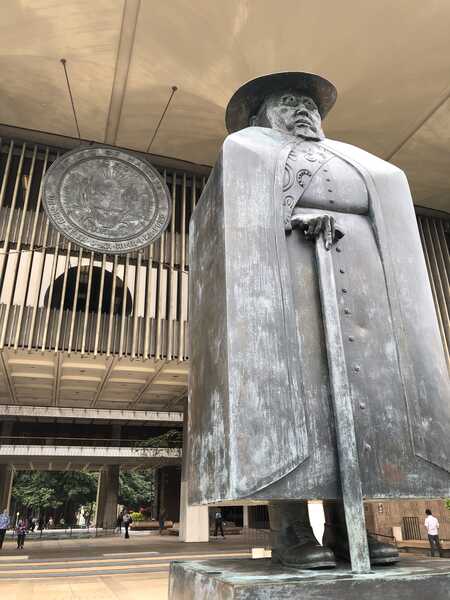 The St. Damien statue on the mauka (mountain) side of the capitol 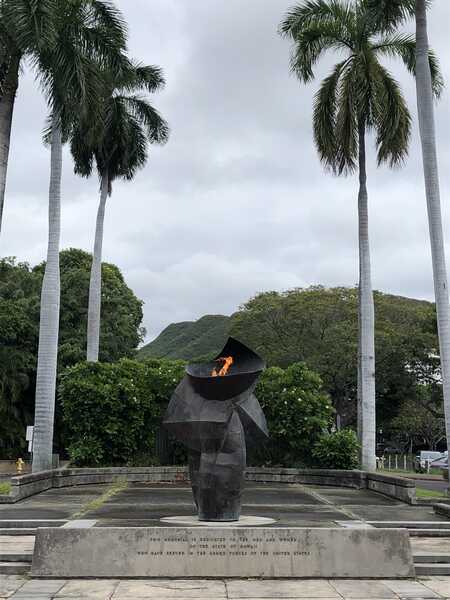 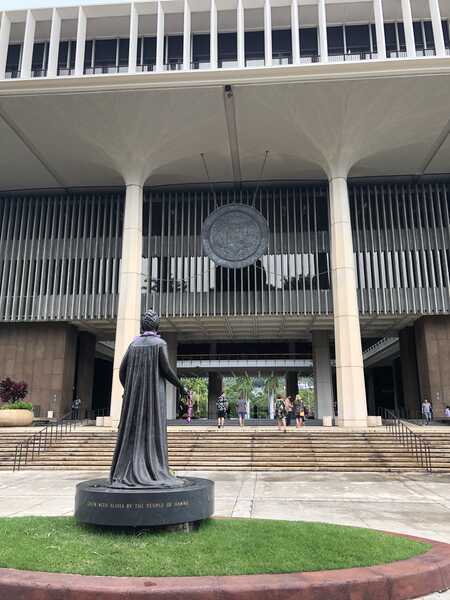 Another treasure trove of mid-century buildings is on the campus of the University of Hawaii - Manoa. There are buildings by all sorts of modernist architects on campus: Vladimir Ossipoff, I.M. Pei, Le Corbusier, and a host of Chinese and Japanese architects as well. All of these architects were part of the Tropical Modernism movement that makes Hawaii such a wellspring of mid-century goodness.

Kamakakuokalani Center for Hawaiian Studies is NOT mid-century, but it is a stunning example of modern Hawaiian architecture. 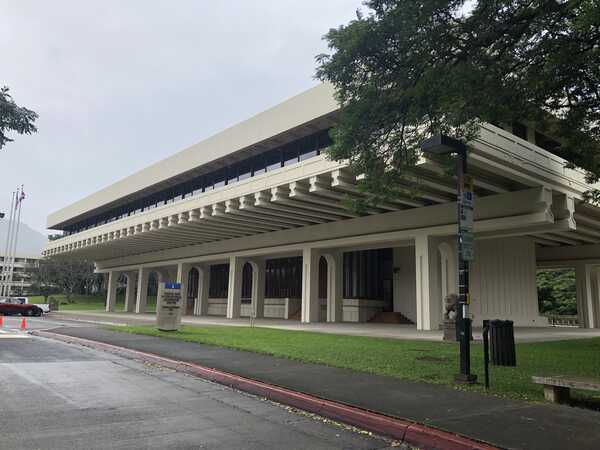 Jefferson Hall, another I.M. Pei building in the brutalist style from 1963 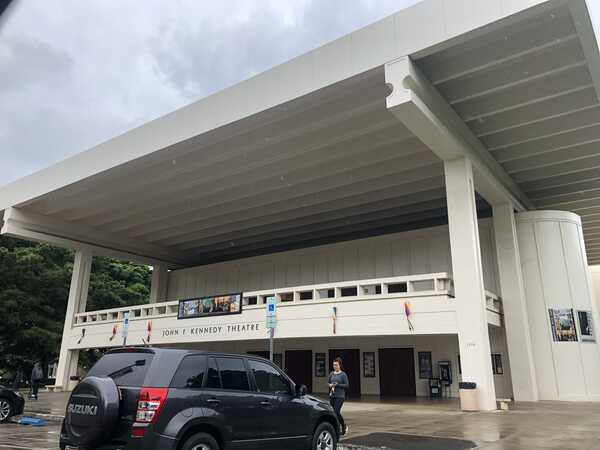 The Kennedy Theater, a 1963 Brutalist building by architect I.M. Pei 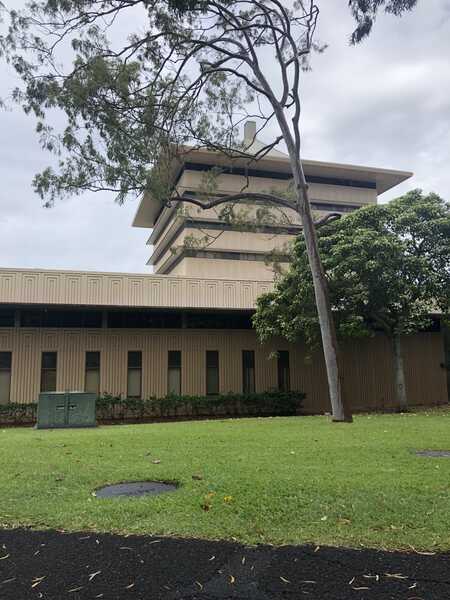 There are two separate cemeteries that we visited while on Oahu. One was on our list of must-see architecture, and the other we just happened upon, but it is beautiful and worth the stop. 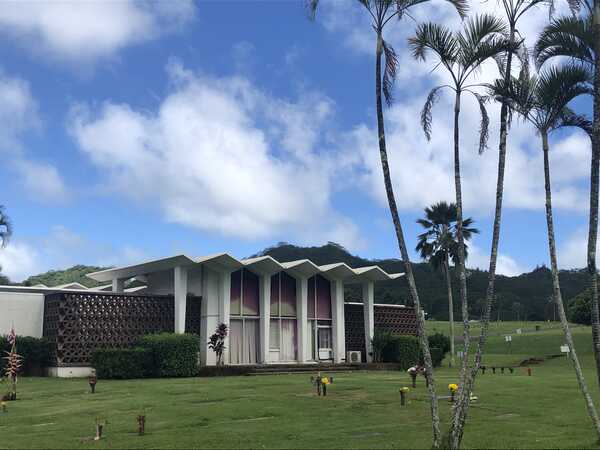 The main building you notice on entering the Hawaiian Memorial Park Cemetary is by George "Pete" Wimberly and was completed in 1958. 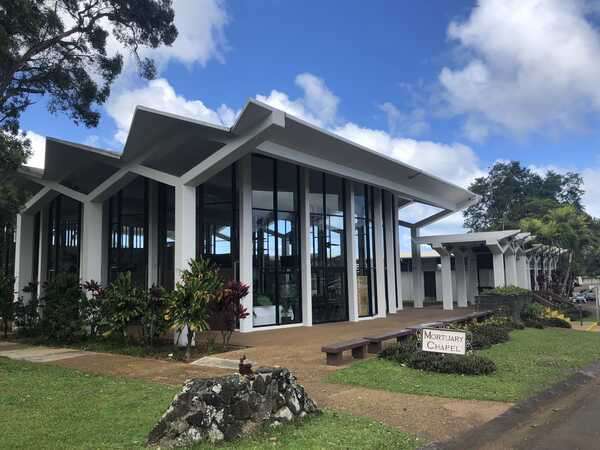 The chapel at the cemetary has a similar zig-zag roof

The photograph at the top of this post is another photo of the Hawaiian Memorial Park Cemetery in Kaneohe, Hawaii. We were on our way to lunch from the Ho'omaluhia Botanical Garden when we drove by the cemetery and spotted the zig-zag roof of the main building and had to stop.

The architect was George Wimberly (also known as 'Pete'), known mostly for being a very successful resort architect of various hotels around the Pacific. You will see, though, that he designed other architecture as well, as you will find his name later in this post. 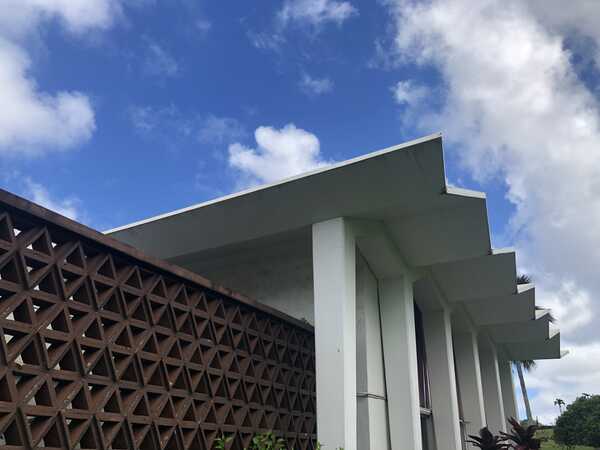 Look at those breeze blocks!

Another Wimberly structure can be found just down the road at the Valley of the Temples Memorial Park. What used to be the Family Services and Administration building was once endangered by the bulldozer. Working with Historic Hawaii the owners were able to negotiate the enclosure of the open courtyard to create a new chapel space for the memorial park, while not disturbing the soaring concrete roofline that makes this building so unique.

Another beautiful 1960's A-frame chapel also sits on the hill of the valley. (As you may be able to tell by the photo, it was POURING down rain while we were there.)

The last must-see item (not shown here) is the 1960's replica of a Japanese Byodo-In Buddhist temple. 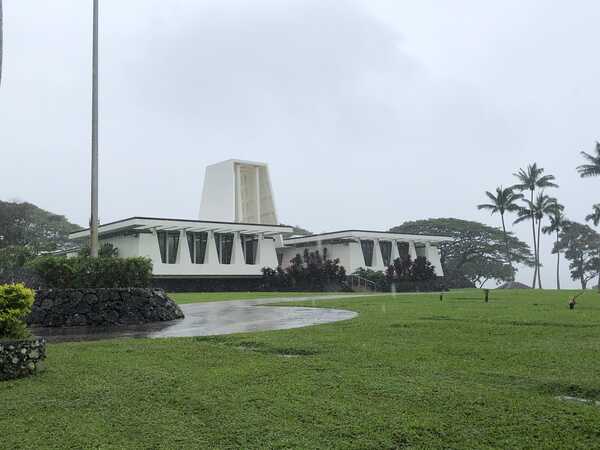 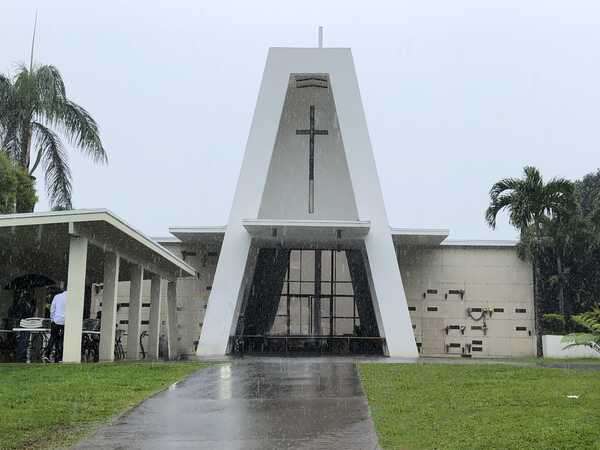 A-Frame Chapel at the Valley of the Temples Memorial Park

There were many other buildings around Honolulu that we happened upon and loved. So much modernism happiness to find! 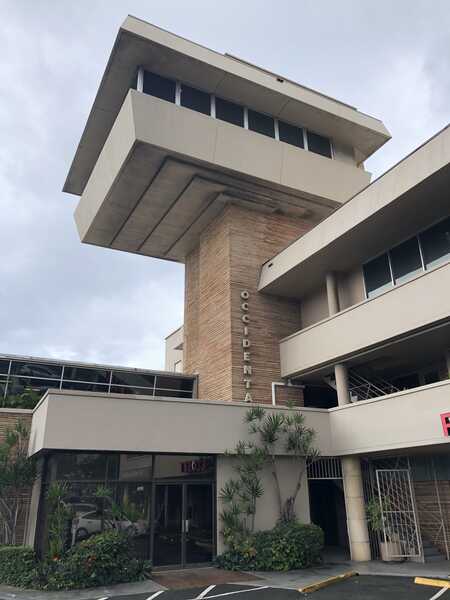 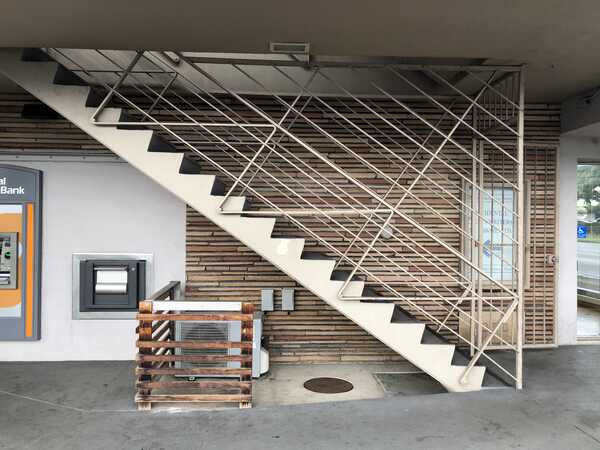 Stairwell at the Occidental Building 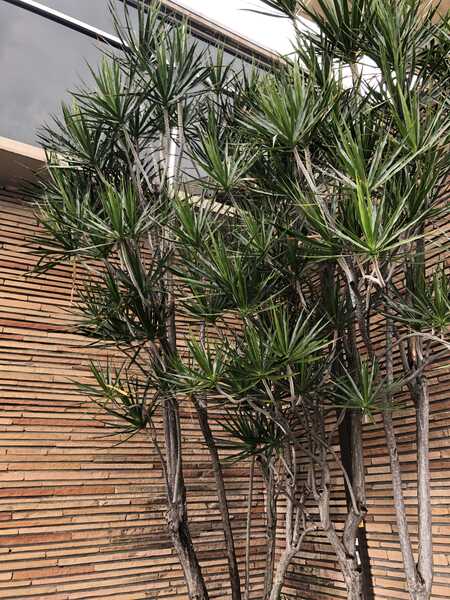 Detail at the Occidental Building 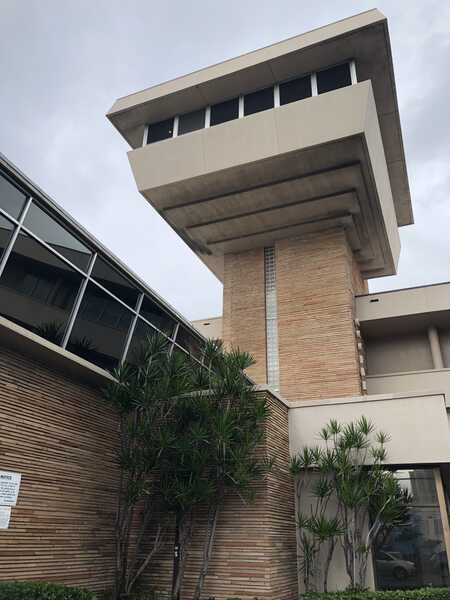 The cantelievered Crow's Nest to the Occidental building was not original.

This eye-catcher made us go around the block and find a place to park so that we could check it out more closely. The original building, designed and built in 1951 by the firm Freeth & Haines, did not have the cantilevered crow's nest which was added in 1967. It seems like the pièce de résistance for this amazing building and houses the board room and the president's office.

The walls are made of low, long pieces of Arizona sandstone, adding to the building's linear look. 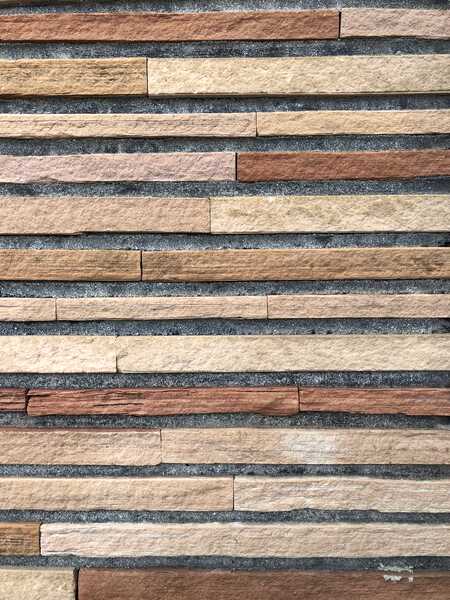 Close up of sandstone at the Occidental Building 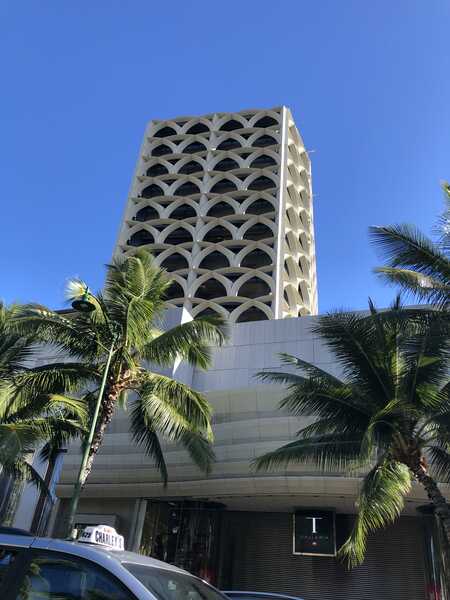 Other buildings that we love are the Waikiki Galleria Tower and the Board of Water Supply.

The Waikiki Galleria Tower was originally the Bank of Hawaii tower and is a glass building surrounded by a fan-shaped skeleton made of concrete. Built in 1966, it's by our now familiar architect friend, Wimbley.

The Board of Water Supply is just east down Beretania Street from the Capitol. Another example of Tropical Modernism, it is a concrete building with a façade of deep inset windows to control the heat of the Hawaiian sun. The light green building designed by Hart Wood, has a very Asian influence in the sides of the recessed sun shades. 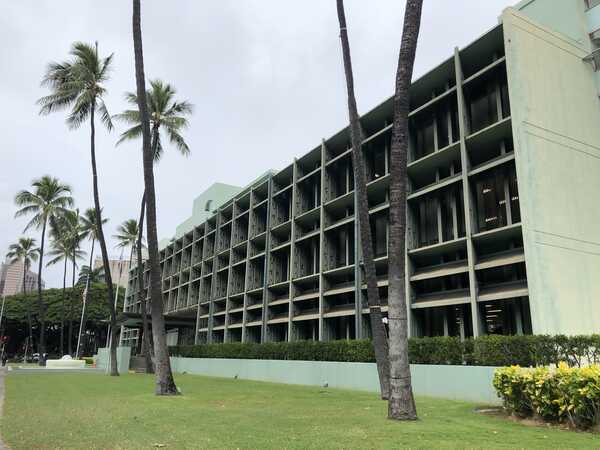 Board of Water Supply Building 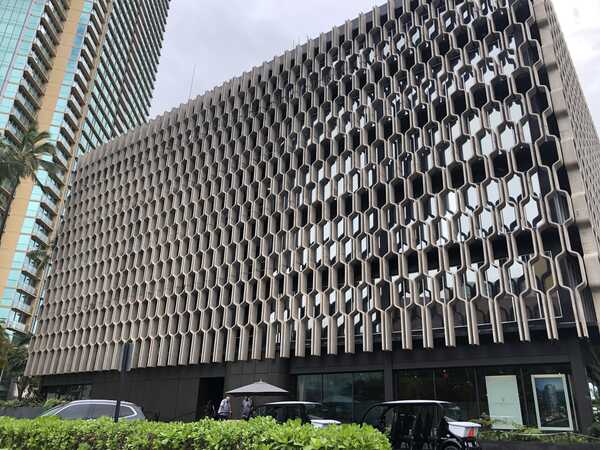 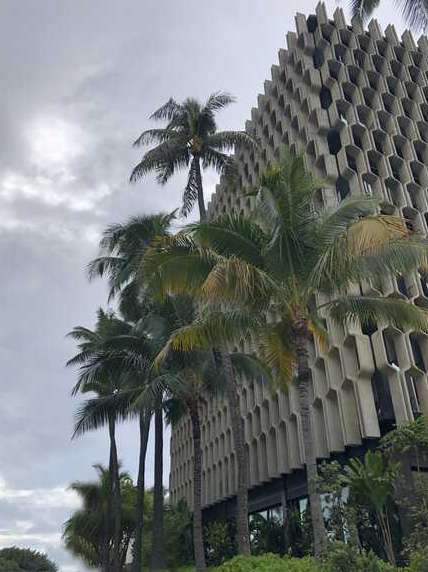 So many of the buildings here in this post were at one point slated for demolition. This amazing beauty from Vladimir Ossipoff from 1962 is no different. The pre-cast façade over a glass building is somewhat reminiscent of the Waikiki Galleria Tower, but instead of more biomorphic shapes, this cast concrete solar shade is a more geometric honeycomb pattern. It is an incredibly iconic building, one that you can't help but notice if you are heading to Waikiki from the airport. (And it is even more gorgeous at night!)

There are so many other things to see in the mid-century realm in Honolulu, and many more architectural places to visit. If you plan a vacation there, make sure to do some research before you go!

Thank you as always, dear reader, for enjoying our blog posts. Questions? Comments? Please leave them below. We always love to hear from you.

Want to know more? Check out these links to read more in-depth information and to see additional photographs.

The Unveiling of the Queen Lili‘uokalani statue:
http://ulukau.org/gsdl2.85/collect/ahcchist/index/assoc/HASH0168/d9a13f2b.dir/doc.pdf

Tropical Modernism on the University of Hawaii Campus:
https://modtraveler.net/city/honolulu_655/listing/university-of-hawaii/
https://uhsoashengallery.com/Tropical-Modernism